At home… on the track or on the streets.

A member of the locally assembled KTM Big Bike Triumvirate, the KTM 790 Duke stands unique from its adventure-oriented siblings. Now locally assembled, it is KTM’s answer to the fast growing naked bike segment that’s dominating the weekend-rider market. Sure, it’s considered a mid-sized bike as compared to its sub-1000cc brethren, but somehow, it could hold its own. It’s torquey and it also loves to rev.

If the aesthetics of the 790 Duke look familiar, it’s because it’s based on the 1290 Super Duke. From the unique headlight cluster, 4-way adjustable handle bar and lower stance, it takes a lot from its bigger sibling, including the sharp lines and of course, the orange and white graphics. 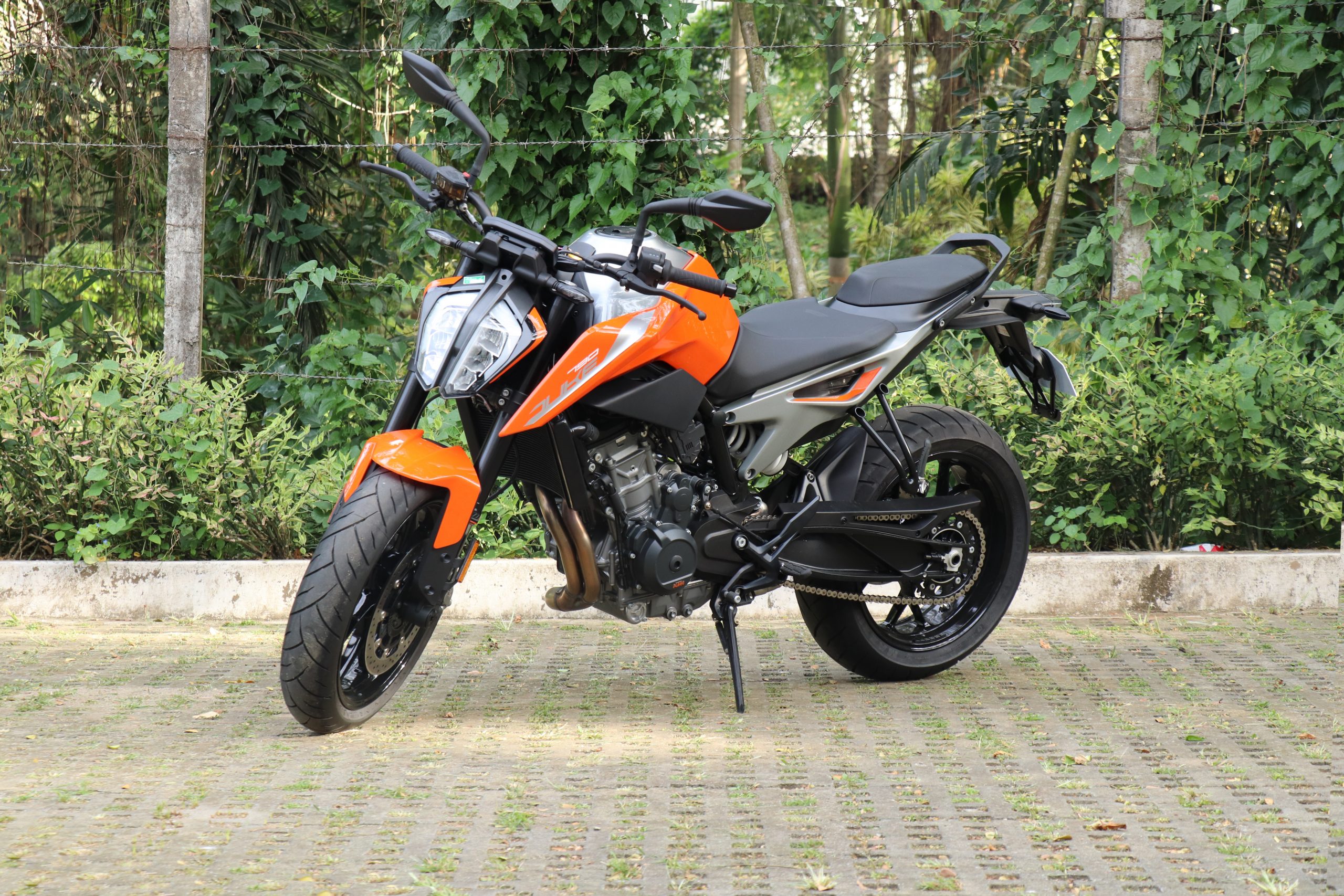 As SOP, riders are supposed to familiarize themselves with the controls and overall feel of a new machine, and this rider is no different. Most important to note are the arm reach to the handlebar, seating position and foot peg location. Also vital is the grip spacing, on whether the thumbs are within reach of the buttons or dials. Thumbs must reach the horn button and dim switch—the two most used features.

The TFT Display is easily readable, which is good since it’s the center of information. Here, the rider can access all vital information (speed, rpm, temp) at a quick glance. It also shows the different ride modes, which we think is the most important feature here—more on that later.

The sitting position is hunkered down as compared to other brands, but not too much as to cause back discomfort. The foot pegs sits a bit higher in anticipation of “spirited riding”… but easily reached when taking off from a complete stop.

The KTM 790 Duke is powered by a parallel-twin, liquid cooled, eight-valve DOHC engine that churns out 105 bhp. Right off the bat, you know the power is craving to get out by the sound of the staccato idle. It’s mated to a 6-speed transmission with a PASC Slipper clutch. It also has the Quick Shift option where you can power shift without engaging the clutch lever; just the quick nudge from a quick left foot.

In lieu of the more conventional Trellis frame, the Duke 790 makes use of an aluminum subframe. Together with a lightweight motor, this results in a compact but firm package that assures precise maneuvering. The center of gravity is lower so balance is very good, even with a heavy-set rider. The 43mm WP fork and WP rear monoshock is a little firm, which is actually expected given the sporty nature of the Duke. It responds to quick turns and slight banking, no slacking and excess bounce. For more serious enthusiasts, however, you could replace the monoshock with after market ones. But as it is, it serves it purpose well.

The three days that we spent with the KTM 790 Duke just wasn’t enough but we managed to put a good amount of mileage on it, even with just “city” riding.

The first few hours were a bit tricky, especially along EDSA. The engine was very eager to pounce on the road, but since it was bumper to bumper traffic, the torque was a tad difficult to handle. Then I remembered the drive modes. I immediately switched to “RAIN” mode, and just like that, the power and acceleration is now smoother. RAIN mode, (for you newbies) delays the power distribution so as to prevent tire slippage on wet surfaces. This also works on stop-and-go traffic, which makes bigger displacement engine easier to handle. And with the slipper clutch, the rider determines right application of power and traction.

Traction control was a plus too! “Spirited” acceleration was put on bay by the Anti-wheelie setting!

The photo shoot consisted of running shots on a straightway and a roundabout. The repetitive runs, although boring, also became a learning curve for the Duke. Acceleration and shifting became smoother, and the entry point and banking on the roundabout became predictable, thanks to the handling of the Duke. Even at slow speeds, the Duke can be steered into the curve deep. In and out of traffic is also stable, thanks to the longer wheelbase. You just really have to get used to it.

And get used to it I did. Three days of continuous riding made me synchronize with the KTM 790 Duke. We were now like clockwork; shifting at an optimal rpm, braking confidently and shifting with or without clutch. I’ve also discovered less downshifting during street runs, thanks to the slipper clutch

The KTM 790 Duke is considered middle ground among the Mid-sized 400cc to 900cc bikes. It’s docile enough to handle city traffic, yet full of chutzpah to duke it out on the track. It may not be a 1290, but it sure as hell will give you a stiff competition. What’s more, the features it possesses is at par with more expensive adventure or superbikes, making the 790 Duke a rare bargain.