Home Motorcycles Get Your Kicks Everyday, Anyday, With The KTM 790 Adventure S Bike 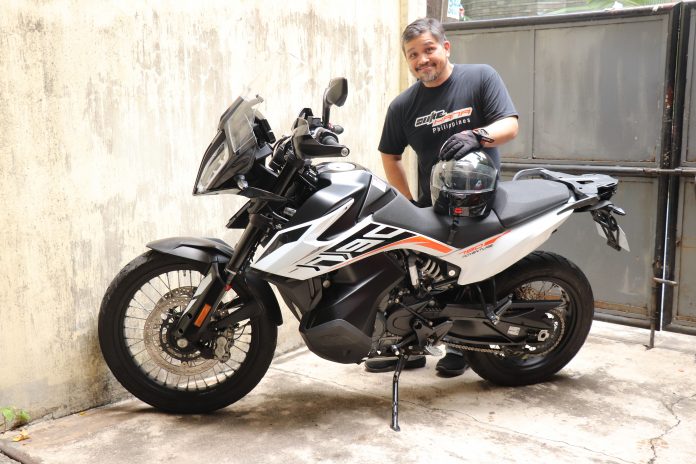 When KTM Philippines officially announced that their mid -sized 790 Duke and Adventure Bikes will be assembled in the Philippines, it set the motorcycle world abuzz. After all, Riders and enthusiasts knew that aside from lower purchase price, parts availability would be strengthened. And no wonder, under the able hands of the Ayala Corporation, KTM Philippines grew from a distributorship to a full pledged manufacturer that now exports to other countries!! 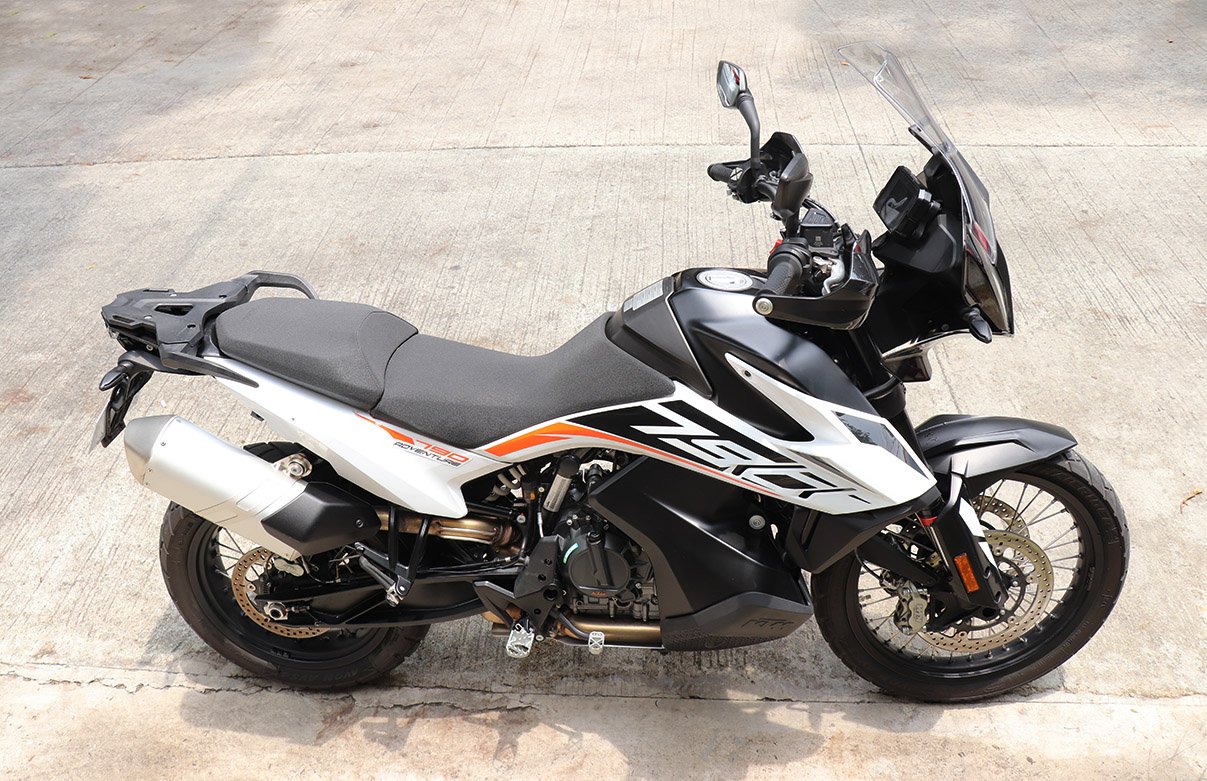 As our usual practice at WheelsPh, we familiarize ourselves with the motorcycle before actual ride. Copping a feel on the ride height, handlebar reach and foot pedal placement, this will spell the difference between an accident-prone ride to a fun and educational one.

KTM tech people oriented me with the features of the 790 Adventure S. First off was how to adjust the seat height. Yes, you can alter the height by adding or removing rubber stoppers under the saddle bracket. Although only a few millimeters of adjustment, it makes a whole lot of difference, especially when planting your feet during stops. The rear seat also has a small compartment for documents and small gadgets. It also has a small toolbox for emergencies.

Next was the 5’ TFT Display. In our opinion, this is the most crucial part of the familiarization. Not only this shows the tachometer and speedometer, it also shows the different drive modes, as well as fuel level, temperature and battery level – -all pertinent information especially on long trips. The five modes are on the left grip, and the information is shown on the screen. If you are new to the 790 Adventure S, stop and park before choosing the proper mode.

The display also has a light sensor that changes background color to adjust brightness; black background for daytime and white during nighttime, all for instant readability.

Next was the foot pedal placement. For proper sitting posture, determine how far your body is from the handlebar and leg reach from the pedal. This is to minimize riding fatigue on long trips. One noticeable feature is the shorter length of the foot pegs of both shifter and rear brakes. You must tuck your feet inwards to press them properly. While this is beneficial on rough marshy terrain, mishifting is a possibility. The WheelsPh team went to Cavite for the photo-shoot. The trip down SLEX was the first test. The suspension proved its worth by giving a firm but comfortable ride, which was a surprise considering the bike was designed with rough roads in mind. Potholes and road gaps were felt but no noise was heard, both from the tires and suspension. The handlebar had no vibration whatsoever. The only adjustment I have to make is the height of the front windshield, as it made a lot of air turbulence with my helmet, so I had to duck lower to minimize the wind force and vibration. 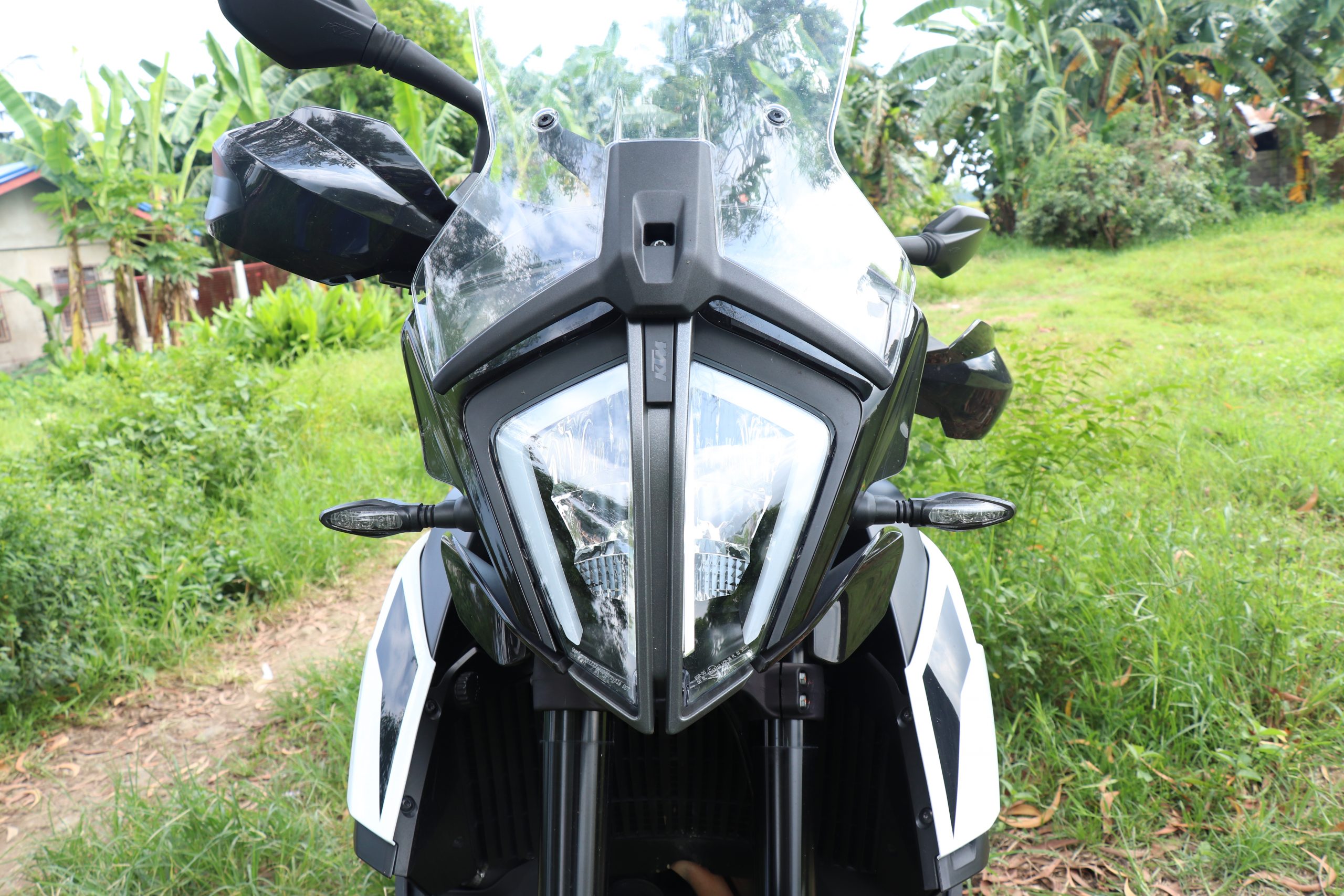 The transmission gears are numerically low to take advantage of the high redline of the engine, so highway speeds were easy to reach, but at slow speeds, the engine buckled if you do not downshift fast enough. This is where the slipper clutch comes in. Even at slower speeds, there is no need to downshift 2 gears down, just depress the clutch halfway and pull the throttle at the same time. This gives enough torque while the clutch semi engages, without bogging down the engine.

During the ride up the hilly Carmona road, rider response time was quicker, thanks to the 6-speed tranny modified with the Quick Shifter Plus. This feature negates the need for the clutch when shifting from 2nd gear to 6th gear. Its simple power shifting really; upshifts at full throttle, and downshifting when throttle is released (engine brake). This was very beneficial at tight turns and when overtaking; no high-rpm lull, no power loss and engine response is immediate, just when you need it.

We encountered heavy traffic at some parts of the town, but the big 790cc engine never buckled from the heat, thanks to the twin cooling fans on the radiator. Any pinoy rider will tell you the archenemy of any motorcycle is extreme heat, but the KTM has licked the problem.

The photo shoot included action scenes and panning shots, most of which took place on rough roads and grassy, wet soil. The 790 adventure was easy to navigate even at slow speeds, with no danger of tilting to the side; a testament to the overall weight balance. Of course, the only disadvantage here was manoeuvring the bike by foot while aboard. The saddle height does not allow to plant your feet flat on the ground. It took another rider to pull the bike out of the grassy area by hand. 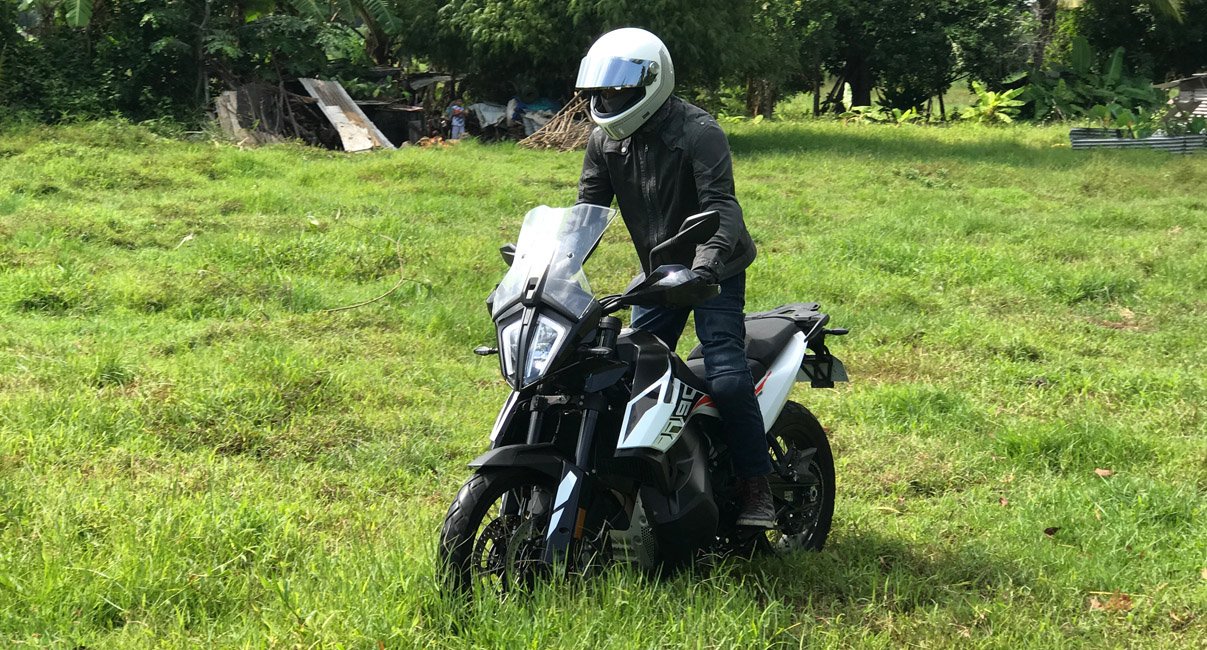 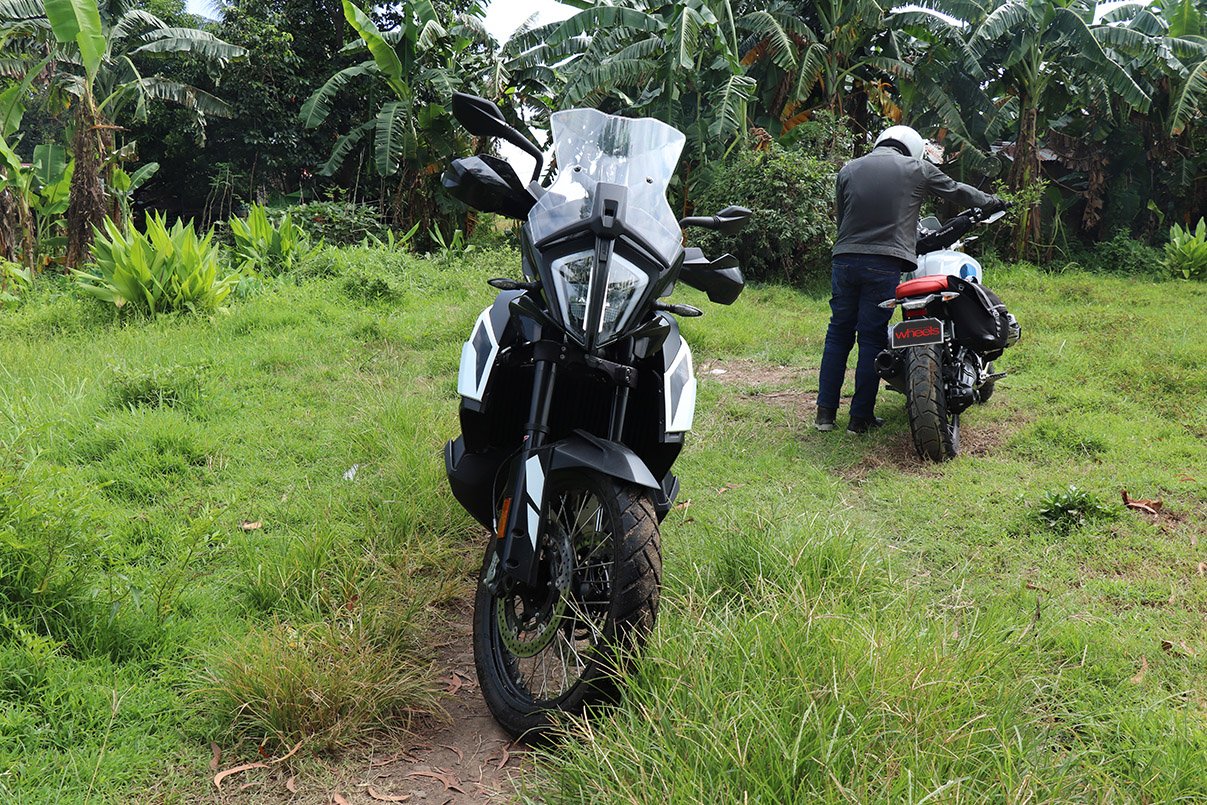 We took a different route back by way of Aguinaldo Highway via Coastal Road to Roxas Blvd. Traffic was now easier, now that I got used to the proper rpm when shifting from take off and overtaking. Slipping in and out of traffic is also a cinch, and giving credit again to the near perfect balance ratio. The bigger diameter front wheel and wide rear wheel makes a great combination.

One of the best ways to discern the ride is the rider’s condition after the trip. I have to admit the heat did me in, but the overall ride was comfortable to say the least. No backache, no neck cramps from the suspension play. Only the inner legs hurt a bit because of keeping a tight hold on the fuel tank for stability and easy reach on the pedals. It was a fun and easy ride

A whole day trip on city streets, expressway, twisties and rough rural roads, the KTM 790 Adventure S didn’t flinch. Short of saying that this is the best kind of motorcycle for everyday use. It has more than enough power and fuel consumption is good. The only disadvantage here is the taller than usual ride height and the sheer size., but hey, you cant have it all. 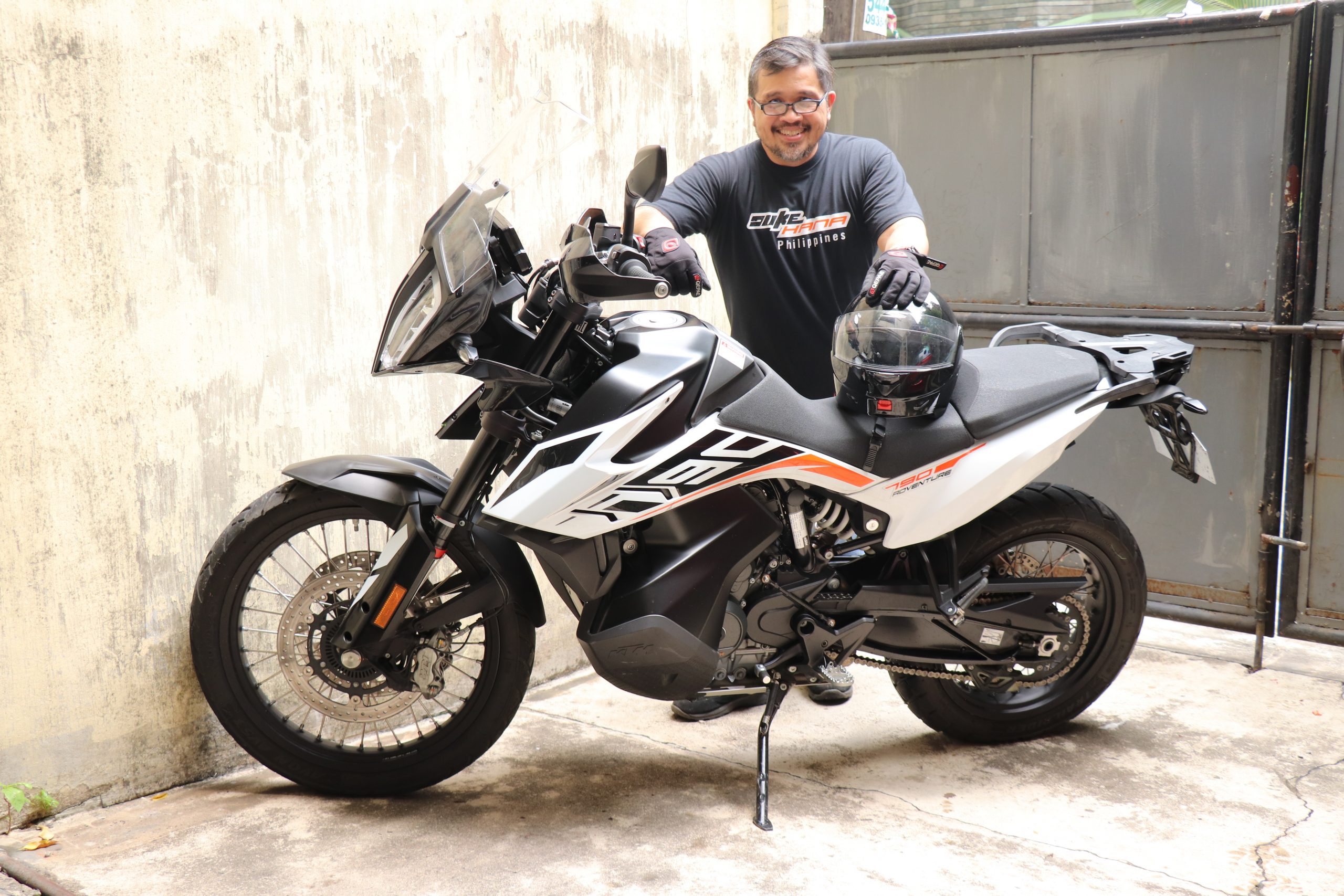 The KTM 790 Adventure S can anything you throw at it. but don’t take my word for it. Try one now.

or go to a KTM dealer nearest you.