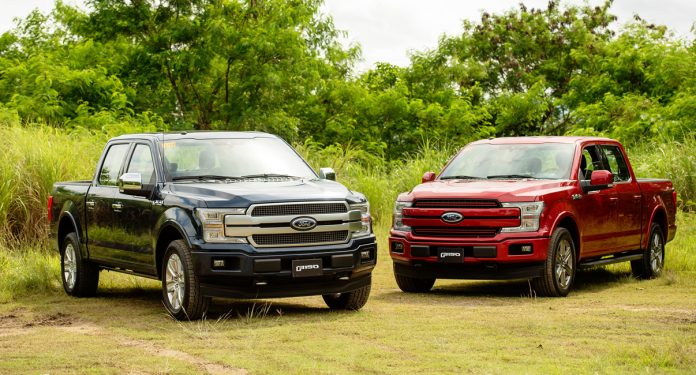 After an almost 20-year absence, is it the return of the prodigal son? Or the unwelcome guest?

In a sudden stroke of inspiration, Ford Philippines is bringing back an icon, offering two variants of the famed Ford F-150 full sized pick-up;, the F-150 4×4 Platinum SuperCrew AT and F-150 4×2 Lariat SuperCrew AT.

As expected, the new F150 was received with much fanfare, even if it was an online event. Days of excitement ensued before the actual launch, with the information embargoed until launch day. Social media was abuzz.

Online Intro for the F150

Automotive media people were the first to be invited hours before the actual public launch. A 15-minute interview was accorded to each media practitioner, which gave us a somewhat brief one-on-one talk with Ford executives. After a short intro and virtual tour, the questions poured in.

Media had some very relevant queries on the actual F150 model and it wasn’t until the online meet were the questions answered…at least most of them.

The most –asked question was why the outgoing F150 model is being launched in the Philippines, while the (2021) model will be introduced in the US a few days after the local launch.

Fortunately, Mr. PK Umashankar, the managing director of Ford Philippines, was there to answer directly. He explained that the current model’s specifications has been thoroughly been selected to fit the overall Philippine market package (i,e. engine, trims, etc) and to formulate the proper price range.  All things considered, the buying power of the potential client is still the major factor here.

Mr. Umashankar also added that as the US model is introduced, it’s specifications are tailor-made for the American market, hence the powertrain, options and other specs are designed for American climate and purpose (usually heavy duty hauling and rough terrain driving).  For the export market in Asia, such as the Philippines, the factory reengineers the whole package to fit each country’s market profile. These developments may take several months or even a whole year to prepare, develop and release. Of course, reliability kinks will be addressed first in the US market to ensure that export models will be seamless and more reliable.

While the Pinoys are used to the indomitable Ford V8, it came as a surprise that the new F150 has a V6 only(!). However,  the powertrain is the Ford’s proven 3.5L V6 EcoBoost (Twin Turbo) engine with Auto Start-Stop Technology. It’s rated at an impressive 380PS of power and 637NM of torque. The torque monster is mated with a 10-speed automatic transmission with SelectShift to power heavy-duty use, and offering exceptionally fuel efficiency.

The F-150 4×4 Platinum AT exterior is a silver mesh satin-aluminum grille and tailgate ornament, chrome side mirror caps, door and tailgate handles. A very helpful aid is the tail-gate step with tail-gate lift assist, making cargo ingress and egress much easier. The lock on the rear gate is connected to the key fob, so access is immediate, also with remote tailgate release,. A big plus is the twin panel moonroof, as well as power deployable running boards.

The F-150 is also equipped with a host of smart and safe features that re to many to list, but the most notable ones are Pre-Collision Assist with Autonomous Emergency Braking (AEB), Adaptive Cruise Control (ACC), Blind Spot Information System (BLIS), Lane Keeping System (LKS) and Auto-High Beam Headlamps.

The F-150 will be available at Ford dealerships nationwide beginning June 25, 2020,

When pressed on why the price of the new F150 was a little too close to the famed Ford Ranger Raptor, Mr. Umashankar stated that the purchase of the F150 is a lifestyle purchase. It is an aspirational vehicle that enthusiasts want to buy in the future. It is not uncommon for an owner of the Raptor “graduates” to an F150. Makes sense, as the Ford enthusiast knows the differences and actually enjoys the ownership.

Pictures do not do justice for the beautiful beast. Get a more personal experience and go to your nearest Ford dealer.