Home Motorcycles The BMW R nineT /5. The Epitome of a Cool Motorcycle 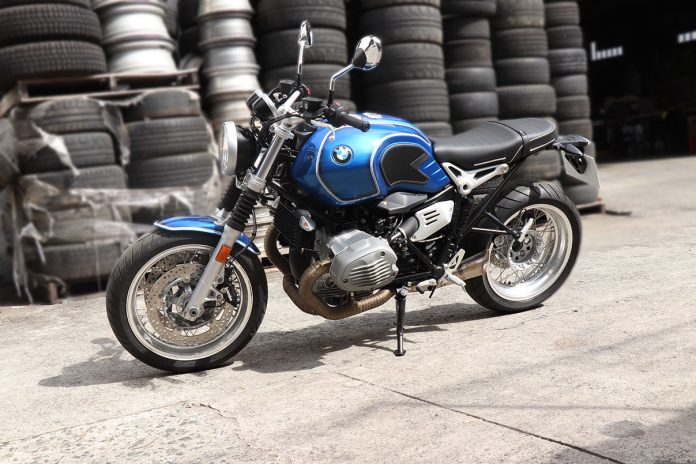 StreettalkPh first came upon the BMW R nineT at the launching of its sibling, the S1000RR. I was hoping for a closer look after the event, but I never got the chance. I thought the opportunity won’t come again.

I was wrong. Thank God.

Because weeks later, I was invited to a mini photo shoot of a recent car show participant. Little did I know that this was the heavily modified Motul Jimny that shook the local car show scene. While we were shooting the White Turbo Jimny for an article (see here), owner Mr. Carlos Gono asked if I wanted to see his new motorcycle. Silly question; we always want to see anything on wheels!

Lo and behold, it was the same BMW nineT /5 model we saw at the launch! Everything does come to those who wait.

Simply put, the BMW nineT /5 is a looker. It has the old flair of the original 1969 model, but also possess the advanced motorcycle technology—the best of both worlds. It is an homage to the legendary /5 series from that wonderful decade.

The R nineT /5 perfectly characterizes the design of that time while also showcasing modern innovative technology and quality.

The 50th Anniversary is packaged in the tradition Blue paintwork with white pinstripes, and aluminum trims that are reminiscent of the 1969 model. You could almost see the both old and new profiles combining, but modern accouterments now decorate the overall design profile. The only telltale differences from the classic model are the bigger gas tank, extended handlebar and raised cylinder banks of the boxer engine.

Compared to the 750cc engine size of the 1969 model, the new R nineT has a more powerful air-cooled, two-cylinder opposed-twin engine. It boasts a displacement of 1170 cc, rated at 110 hp for a more energetic power output, even at low speeds. Also standard are safety options like the BMW Motorrad ABS, the ASC Automatic Stability Control, and heated grips (very convenient during cold night rides). The R nineT /5 continues the mindsets of originality and independence born in the 60s, but supported by modern riding technology.

Everybody that knows Mr. Carlos Gono is performance personified. With businesses that dabble with anything that adds power, like sport tuner Autoplus Sportzentrum, and as the official dealer of Motul Premium Lubricants, its no wonder that his BMW R nineT is also not stock.

For purists out there, no need to cry, his modifications were limited to bolts-ons like the exhaust. Oh course, the beemer now has Motul performance oil in that big boxer engine.

Zard | Made in Italy Exhausts technology

The growl of the R nine T I louder right off the bat. The staccato reveals that it’s a boxer engine but with a louder growl. Upon closer inspection, it now employs ZARD exhaust system, with the tubes finely wrapped in Zard heat wrap, all the way to the mufflers. The overall sound is literally music to the ears.

When asked how he ame upon the R nineT, Mr. Gono sheepishly admitted, “ I was told by my friends at BMW  Motorrad that there is a shipment of a few limited series of BMW Motorcycles. Knowing the value of rare models, I snatched one up before researching on it. Looking back, I’m very glad I bought the R nineT. It’s a beautiful bike. It being a 50th Anniversary edition was icing on the cake!”

Mr. Gono asked me if I wanted to test the R nineT. I respectfully declined, as I did not bring a helmet. He then told me to just take a spin around the driveway, to which I hastily agreed.

Upon mounting, I felt the overall ride height was comfortable. Both feet reached ground level, and the seat width was just right; no undue strain on the legs, plus it was snug but firm. Rolling off, the clutch lever felt lighter than other models I’ve tried. You could feel the torque move the bike even at low rpm. The forward stance was not overreaching, just right for the average pinoy rider. Shifting to second was almost unnoticeable, with nary a click. Quick shifting, if I may add.

Alas, the ride was over before I knew it. I never reached more than 2000rpm, so I knew the short ride was inconclusive to assess the now-collectible bike. Nevertheless, the initial impression is enough for a short article. Who knows, I might get the chance to ride one again.

Text and Images by Earl Manalansan