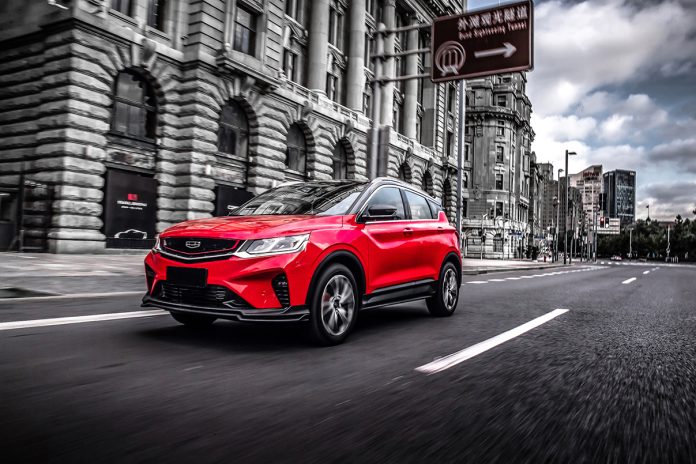 To create a world-class car, you need a team that knows the world.

At Geely, the world holds no limits and the Coolray, a compact B-segment crossover, is the result of a global collaboration between teams of designers and engineers. With studios in Shanghai, Sweden, California, Malaysia and the United Kingdom, Geely Design alone has nearly 1,000 designers and support staff spread over the globe. “Our design studio is like the United Nations – we have over 21 nationalities, and on a daily basis at our Shanghai studio, I hear Malay, Chinese, Swedish, French, German, and of course English conversations,” says Guy Burgoyne, Head of Geely Design China.

From such a global pool of talent emerges a car that embodies and symbolizes the energy and charisma of its target audience: globally-orientated youth and young families.

“They appreciate design; they want design to be a focal point of their daily lives, and they want the car they drive to be an extension of their personality. What they don’t want, but what they’ve had to settle for so far, are bland, uninspired blobs on wheels with nondescript grey or black interiors”, says Jamie Barrett, Lead Exterior Designer for the Coolray.

The Coolray’s personality exudes fun and confidence, yet at the same time is exciting and mature; it balances performance with safety. All these facets are embodied in the exterior design. Although clearly part of the family, the Coolray has its own personality and will not be mistaken for another family member. “We aim for our cars to have different themes based on a core style,” says Jamie.

Take Geely’s iconic Cosmos Grille for example – on the Coolray the rings are wider and deeper, and create a wide mask containing the grille and lights. Meanwhile, the lower bumpers have been sculpted to pass air around the car thereby improving fuel economy. “The front is sculpted to have bold volumes that give off a strong 3D effect. The hood features a strong power bulge that narrows towards the front, focusing in on the Geely badge. The surfaces and curves feel rich and premium to give off a quality feel,” Jamie explains.

The satin chrome wing leads the eye over the car’s powerful front haunches expanding into the side profile before rising into the D-pillar. Boosting the Coolray’s sporting credentials are the carbon fiber elements on the front and rear bumpers, along with the rims, which together give the car its sporty stance and fun road presence.

The low-slung silhouette and speeding hood have been built to give the car its presence. Many of the elements of the design are inspired by the world of aviation. Where the roof shoots down at the rear it appears to be suspended over the D-pillar.

“This is inspired by aircraft wing stabilizers, to simulate cutting through the air with precision and create a floating sensation,” says Jamie. The aero-inspired spoiler and jet thruster-like twin exhausts build on this theme and help give the Coolray its playful, sporty feeling.

Inside, the aviation theme continues right down to the two side air vents, again inspired by jet engines.  Coolray’s Interior Designer Mei Song explains, “The layout of the driving area adopts the design style of a cockpit, expressed in a lighter and more dynamic way, bringing sheer driving pleasure to the driver.”

The first thing many people will notice is the 10.25-inch floating control panel, which gives a vibrant feeling to the interior. However, countless more design nuances contribute to the car’s interior experience. Mei Song continues, “The expansive cabin space was created using seamless layered architecture. For example, the horizontal theme extends from the instrument panel all the way to the door panel, making the visual look wider.”

The visual cues and details add to the overall aesthetics. During the daytime, decorative dashboard panels display an orbiting planet-inspired pattern. As night rolls around, this switches to an echoing pattern which features a resemblance to the expanding front Cosmos Grille.

Adding to the sporting vibe is the red dashboard and accenting on the seats and door inserts. This, however, is not any old red – much thought has been put into the hue and its effect on the driver.

“The red color used in the interior is optimized with the right levels of saturation and hue, just like the color of a vintage red wine. This gives an overall stylish and stimulating look and feel while avoiding the usual visual fatigue caused by bright red that can also affect driving safety,” says Mei Song.

Rounding out the fighter plane like cockpit is the ergonomic jet throttle-inspired shifter. Just like in a real fighter jet, this sends commands rapidly down a wire to the 7-speed dual clutch unit rather than by a mechanical connection.

Coolray is certainly an apt name for a car so suitable for its target market. 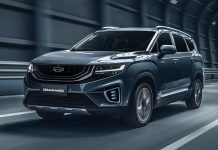