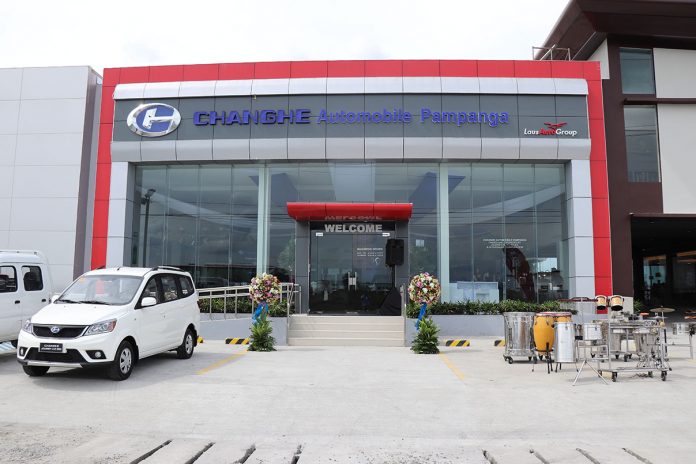 Expanding its footprint in the automotive industry, The Laus Group officially opens its Changhe dealership along Jose Abad Santos Avenue in San Fernando, Pampanga. With over 13 brands in its portfolio, Changhe Automobiles will meet the growing market demand for reasonably priced MPVs.

As its initial offering, Changhe San Fernando launched the popular M60 7-seater MPV. If the M60 looks familiar, BAIC Motors in Makati also has its own version of the M60, albeit in automatic transmission and upscale package. It makes sense since the M60 is manufactured by the BAIC Group in China.

The exterior design looks similar to the leading MPV brand, but the M60 looks flashier. Style queues include a gaping mouth grille, projector headlamps, roof rails, black body claddings and bigger 17in rims and tires. Overall, the M60 looks more of a SUV than the MPV it really is. And that’sa good thing.

Most notable are the faux dual exhaust ports, wrap-around signal/fog light combination and lower bumper lip that also acts as an air dam.

The M60 has almost the size and dimension of the more popular brand. Changhe upped the ante by equipping the M60 with luxurious options like 2-tone Black and White upholstery and second row Captain’s chairs. The dash is topped by leatherette instead of plastic, and the entertainment system is the popular ‘floating pad” variant, with Bluetooth and USB connectivity.

A New Age for the Laus Group of Companies

Ms. Lisset A. Laus Velasco, the new Chairman of the Laus Group,welcomed guests and presided over the ribbon cutting ceremony. With the presence of guests from the local government, banking and media industry, she reiterated to continue her late father’s commitment to the transportation industry as well as meeting the demands of the growing market in Central Luzon.

The new Changhe dealership is another achievement for the conglomerate.