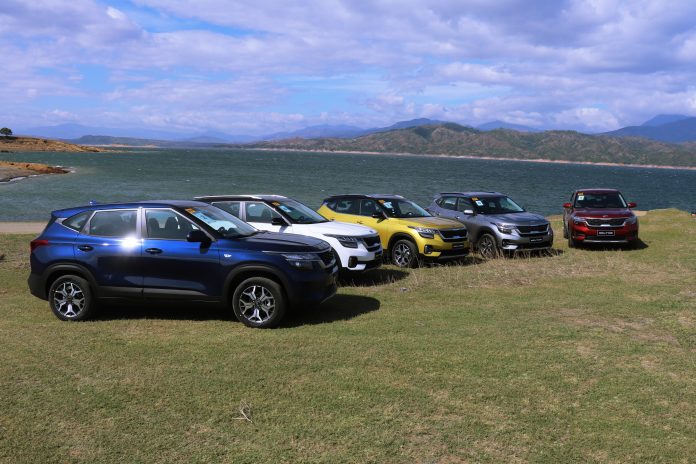 A 300 km driving experience, showcasing the comfort and versatility of the new Kia Seltos

In line with the 1st anniversary of Kia Motors Philippines under the helm the AC Industrials, the KIA team decided to celebrate with a media test ride with the new Kia Seltos. This was not an ordinary drive; the 300 km back to back trip was specially chosen to maximize the Seltos driving experience, with a mix of highways, zig-zag roads and, rural streets.

With 43 media members joining, driving chores were divided among three drivers per unit.  This was planned to give each member a taste of the abilities of the Seltos. With passengers and cargo, the overall performance will be put to the test.

The Road to Baler

After leaving the Estancia meet-up area, the team was in NLEX in no time. With speeds up to 100kph, the Seltos exhibited minimal road noise. With the exception of tire thumps on uneven roads, the ride was quiet.  Surprisingly, when downshifting, the CVT tranny changed gears immediately, with no lag whatsoever. More later.

The Seltos engine also showed its flexibility. With the CVT, the 2.0-liter Dual CVVT-4-cylinder with a power rating of 149ps at 6,200rpm and 179Nm at 4,500rpm, performed to expectations. Even without a turbo, the power was more than adequate. Mated to Kia’s Intelligent Variable Transmission with Drive Mode Select, power acceleration and quick shifting raised the Seltos to a seemingly sportier level. With casual driving, the powertrain showed good fuel economy, especially in traffic prone areas.

The Drive modes, while confusing at first, actually make sense. The Eco Mode is good for traffic, with slower acceleration for comfort and fuel economy, The Sport mode is perfect for spirited driving; featuring higher shift points and aggressive downshifting, maximizing power and torque.

The team arrived in Costa Pacifica Beach Resort, a scenic tourist spot famous for surfers competing on its huge waves. After resting, everyone gathered for the main event; a dinner complete with a live band in the beachfront garden, and the surprise awarding to each member a limited edition Seiko Watch with the Kia logo – a token for the 1st Year Anniversary, and also for the very successful sales performance of KIA .

“On the onset, it may be viewed as just another new entry into the crossover segment. Yet it is packed with style, comfort and convenience, and safety features that cater to anyone looking for a vehicle for both the daily commute and weekend adventure. And as you experienced earlier, you can tailor the drive to suit your own style behind the wheel. ” stated Kia Philippines President Manny Aligada

Trip Master George Ramirez and his team decided on a longer but more challenging route via the twisty the Baler-Bongabon Road. (Built in 1940, it was inaugurated by the First Lady Auroa Quezon, who ironically, was killed this same road in an ambush in 1949.) The Zig-Zag route was perfect to test the power and suspension of the Seltos. The 40km road proved a challenge for the drivers and passengers, even making some of the passengers nauseous because of the G-force. Not so with the Seltos, the suspension inspired confidence for the drivers, not much body roll and wheel hops. The engine was powerful even in steep climbs and sudden turns, with the CVT shifting instantaneously when needed. This was the revelation that impressed most of the drivers. The Seltos performed like a modified sedan.

After nearly 8 hours on the road (including pit stops and dinner), the party arrived home safely. The aftermath was not bad. No backaches, leg cramps or stiff arms. What impressed us was that the riding comfort of the Seltos was very comparable to a big sedan. The suspension was firm but not uncomfortable, even under full load. The engine performed flawlessly, with enough power even with 140kph bursts. Oh, the engine made a deep howl at higher rpm, which is imposing, by the way.

Of course, the other amenities made the ride more bearable; the excellent entertainment system with Apple Car Play, the very beneficial navigation system that gave a preview of the twisties) the very cold AC, and the surprisingly generous rear leg room.

The 2-day jaunt revealed much about the capabilities of the Seltos. It’s the complete package for a subcompact crossover SUV. It has enough power, more than adequate legroom, state of the art amenities and the most important, the good looks. The Seltos is the complete package.

Truly, Kia Philippines saved the best for the last unboxing last 2019. The Seltos is the sensible and attractive subcompact crossover SUV. Priced competitively, it will give its competitors, whether crossovers or sedans, a run for their money.

Long trips need not be punishing anymore. Ride in a Kia Seltos and enjoy the trip more.