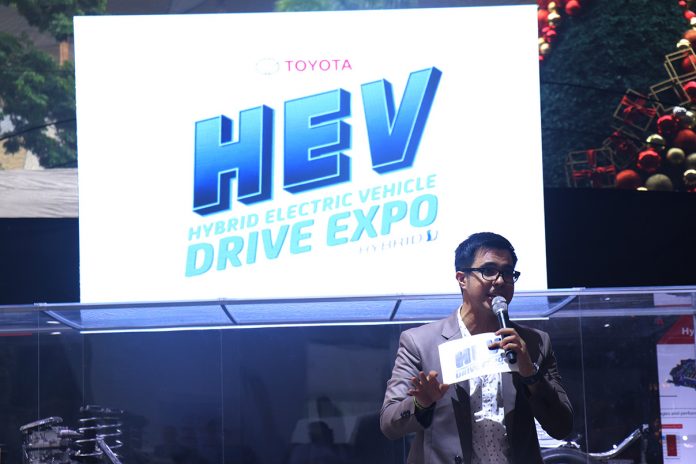 Toyota Motor Philippines Inc. (TMPI) started a mall tour on its Hybrid Electric Vehicle (HEV) Drive Expo to emphasize the importance and benefits of the HEV vehicles that will soon ply our shores. This is also to correct any misinformation or urban legends that seem to nullify the actual importance of this segment.

As part of Toyota’s 30-Year Plan, this is the preliminary vehicles that are either Hybrid (Gas engine-Electric Motor combination) or Fuel Cell powered. Hurdling government issues and electric recharging infrastructure obstacles, Toyota and its luxury division LEXUS, have introduced HYBRID car models that are now available to the public; like the Lexus 400 sedan, SUVs and of course, the Toyota Altis Hybrid that is now making waves in the media world. Note that reported average city driving consumption is 26km/liter, while highway was at a measly 60-70km/liter. In fact, Toyota’s PR point man, Mr. Carlo Nemo, stated that a recent trip to Tagaytay City only consumed 3 liters!

Toyota Philippines also showcased the concept vehicle, MIRAI, a Hydrogen fuel cell powered sedan that is so technologically advanced, from the propulsion system, to its fuel cell infrastructure. This may the the shape of things to come.

The HEV Drive Expo Mall Tour started in Greenbelt 5 on November 22, up to November 24, 2019. Next tour is scheduled on December in SM Mall of Asia. Keep tuned in StreettalkPh for announcement of dates.