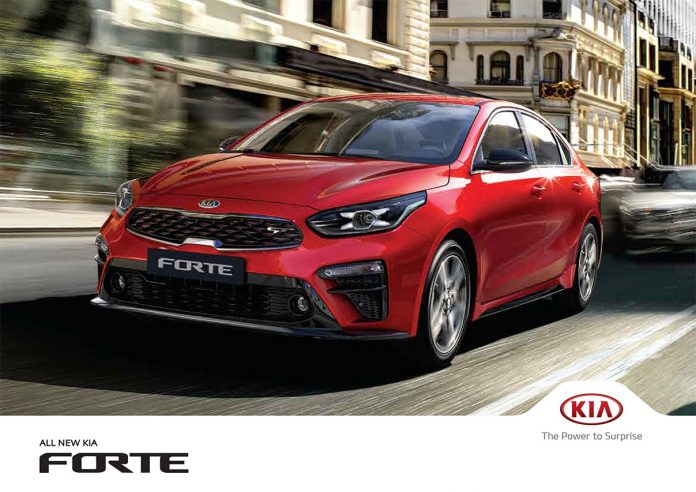 The Forte is the Stinger wannabe

“Forte.” it is an expression of power, of strength; of an exceptional ability cutting above the rest. In music, it means to be louder, bolder, stronger – to feel the rush unleashed in a snap. In life, it’s reflected through the people with the desire for speed. The Kia Forte GT is a feisty echo of that ignited passion.

This car radiates power, with styling cues from the intimidating Kia Stinger. Its aggressive fascia with signature LEDs is complemented by a blacked-out “Tiger Nose Grill” with red accents. In the rear, there are dual exhaust pipes, a duck tail spoiler in black and again, a signature LED rear lighting. The Forte GT has a brawny beltline, giving it a well-proportioned shape.

It’s the most powerful compact sedan in its class; leaving its Japanese and even entry British rivals miles behind. Shifting it to “Sport Mode” means business. Doing so unleashes all of Forte GT’s 204 horses under the hood, thanks to its 1.6L Inline-4 Turbocharged Gasoline Direct Injection Engine.  A maximum pull of 265Nm is on tap from around 1,500-4,500rpm, making this vehicle quick on overtakes. Even for a front-wheel drive, the feisty car on 7-speed dual clutch transmission makes the car more responsive and gives an overall adrenaline-pumped connection between car and driver… now if that isn’t provocative enough.

The Forte’s interior too, evokes the sensation of speed. The driver focused cabin has sporty circular vents on both ends. Tactile connection between car and driver is evident with the layout of buttons and knobs under the 8” touchscreen infotainment system. As cool as it looks, the car also gives the optimal temperature with the Dual-zone climate control. Comfort is uncompromised, with powered leather seats with contrast stitching finished off with a special GT badge.

Up in the cockpit, the analogue gauges only add to the racing aura. Meanwhile, the steering wheel control buttons give access to the car’s dynamics and other functions such as cruise control and its flat bottom shape with a GT marque caps of the performance flare.

The Kia Forte GT is not for the fainthearted. It’s for people with the audacity to perform on and off the racetrack.

For more information on Kia Philippines’ product line-up, log on to https://www.kia.com/ph/ or visit any of its dealerships nationwide.