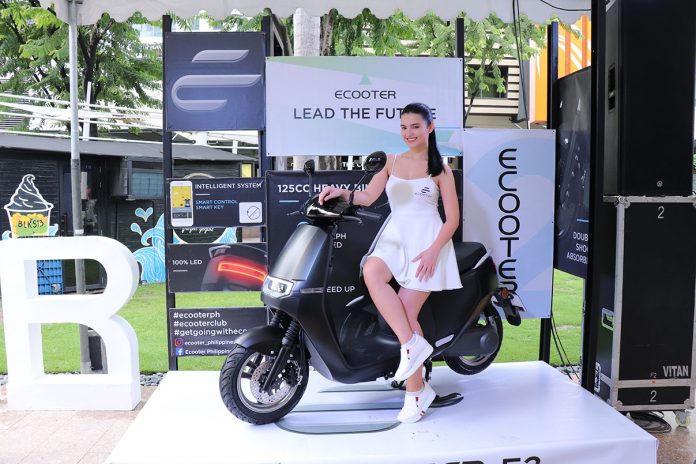 A rainy afternoon did not dampen the spirits of those who attended the launch of the Ecooter – the supposed “sports car” of scooters. While some of them joked about how electricity and water are not compatible, there was nothing of that sort in the new kind of scooter. In fact, it “electrified” the crowd.

The Ecooter, is manufactured by Dayang Motors of China and sold thru its local distributor Sobeler Corporation. This revolutionary means of transport has two variants; the E2L and the sporty E2R. Make no mistake, both scooters are very attractive and trendy to look at. Visually appealing is an understatement.

Touted as an environmentally friendly scooter with zero emissions, it is an alternative to the common 125cc gas burning engine. The E2L has a 2.5kW electric motor while the and E2R has a bigger  4.2kW capacity. Both are powered by lithium-ion Samsung batteries.

The E2L has a claimed 75kph top speed with a range of 80km, while the E2R has a claimed 90kph top speed and about 140km range. The only drawback to the super economical Ecooter is the charging time; E2L batteries require almost 3 hours while the E2R needs 5 hours. If you ever purchase one of these models, think about buying a spare battery. It may be a little expensive but it will come in handy when you need it.

Both E2 models have light-adaptive dashboard, U-type aluminum alloy frames, ,12-inch alloy wheels with tubeless tires, front and rear disc brakes; And yeah, it also has an app where you can link your Ecooter to your smartphone. Pretty handy for a hands-free phone operation.

One drawback (for now) is the status of the Ecooter with regards to registration with the LTO. Current registration laws do not cover electric bikes, but Ms. Belle Santiago of Sobeler Corporation says safety is the priority of Ecooter. Before any laws or ordinances are passed, all buyers are encouraged to have valid drivers licences (with Restriction 1), and must use safety gears such as helmets and paddings. After all, these are not the slow type of e-bikes, but more like a bigger-engined scooter.

Host Paolo Abrera, who also owns an Ecooter, and guest celebrities also spoke at the launch, giving their testaments as happy owners of the trendy scooter. “Going green” is now the trend, and with popular personalities leading the way, it won’t be long that electric scooters such as the Ecooter will become a standard mode of transport instead of just a novelty.

The Ecooter E2L has a retail price of PHP95,000, and the Ecooter E2R retails at PHP190,000. Bank financing is available through Security Bank.

Notwithstanding the LTO registration problems, the Ecooter promises a safer and definitely more economical and environmentally-friendly scooter. And with Manila’s growing traffic problems, it’s the better alternative transport mode. The future of scooters is definitely here.

Established in 1992, Da Yang Motors has moved towards a viable solution with the release of their electronic motorcycle series in March 2017. An environmentally-friendly alternative to fossil fuel guzzling motorcycles, the Ecooter also known as “Sports Car of All Electric Scooters” was launched in the hopes of bridging the gap between our ever-growing reliance on technology and conservation of our planet. Today with a joint venture with China’s top IT group and leading global suppliers, the company brings consumers the ECOOTER E2, which boasts a 4200W electric motor that reaches top speeds of 90 km/hr over the 2500W of the ECOOTER E1. The model also features a larger battery capacity for longer travel (140 km) and an ergonomic design for a relaxing and comfortable drive. Keeping consumers in mind, the E2 is also coupled with an intelligent interactive cloud system that allows users to view real time vehicle information through the Ecooter App, providing easy monitoring and maintenance for the super scooter. And with its double parallel battery system, your Ecooter can bring you to even further mileage.