Home Cars The New Geely Coolray. Cool is back in town. 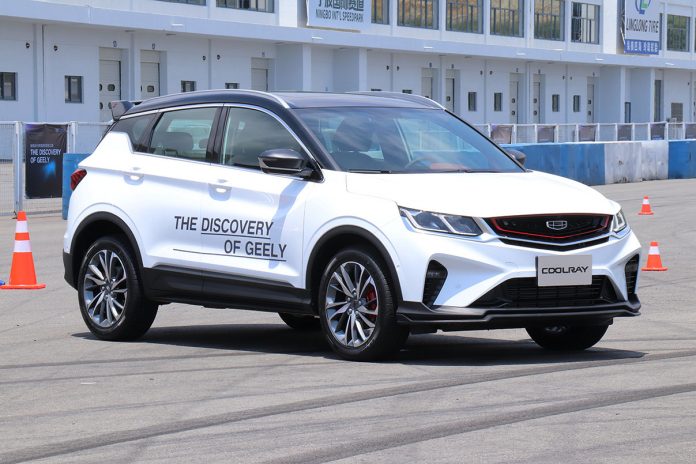 After almost a decade of absence, Geely Auto is poised to make comeback this September with the new Geely Coolray Crossover  (yes, that is the name) as its initial offering. Sojitz G Auto Philippines is the official Philippine importer/dealer and they are promising a new and revitalized brand, with matching after-sales support

So, why the confidence in Geely Auto? Well, for starters, ZGH acquired ownership of some world class brands, such as Volvo Cars, Lotus, PROTON, and even the famous London Electric Vehicle Company (makers of the ubiquitous British black taxis) to name a few. The engineering and technology of these companies have cascaded down to Geely Auto, so quality, reliability and top engineering is the priority in development of all Geely models.

The Geely Coolray a 5-passenger crossover with Front Wheel Drive configuration. It’s profile is sporty to say the least, with a flowing roof and sharp body lines. The D-Pillar has the floating look design that is accentuated by a top spoiler.

The interior is very futuristic and practical with luxurious materials and offbeat design. Instead of analog gauges, instrumentation is a fully-digital 7-inch LCD unit which gives an array of display, depending on the selected driving mode (eco, normal, or sport). A 10.25-inch HD touchscreen at the center of the dash reads for infotainment and connectivity. All controls are within arm’s reach. A short electronic shifter provides more room for small items and houses charger ports for mobile gadgets. Also, Philippine editions will be equipped with a panoramic sunroof.

The powertrain is a turbocharged 3-cylinder, 1.5 liter petrol engine, equipped with a seven-speed dual-clutch transmission. Rated at 177hp and 255Nm of torque, this is more than enough to propel the crossover to respectable performance. The engine is so well balanced that in order to demonstrate the smoothness of the engine, a cigarette was left standing on the horn button as the engine was started. The cigarette didn’t even flinch.

The new Coolray will also have an assortment of much welcomed driver-assist technologies, including a 360-degree-view monitor (by four exterior cameras) and an auto-park assist feature.

The Coolray and some different manufacturer’s crossovers were subjected to a short gymkhana-type course to test the handling and power, at a timed pace. In comparison, the Coolray exhibited more power in acceleration and coming out of a tight turn. There was a hint of bodyroll, but was still generally stable. Most importantly, the brakes were very powerful – no lag or hesitation. All this was done in full AC comfort.

The next test was the Automated Park Assist mode. Press the assist button and drive by the selected parking space. This is for the computer sensor to measure the allotted space, and the turn diameter. This is done hands free from the steering wheel, with the right hand pressing the button the whole duration. What’s amazing is that the car will adjust to the space; going forward and back while steering itself in tighter space.

The Climax of the Geely test was the blind drive feature – Front and rear windshields, including all windows, were covered with black plastic, rendering the driver blind. You will have to rely on the 360-degree-view monitor to assess and decide which direction to go. It took a little time to get used to the system, but once you get the hang of it, driving or backing up with little or no visibility is a cinch, thanks to the clear and accurate display on the monitor. This is only for emergency purposes, of course.

That said, how much would the Geely Coolray set you back? Well, the folks at Sojitz G Auto Philippines Corporation says that the prices will be at around PHP 950,000 to PHP 1,100,000, depending on the variants. Not bad, considering the opulence and technology involved in building the Coolray.

Honestly, we can’t wait until the official launching this September.