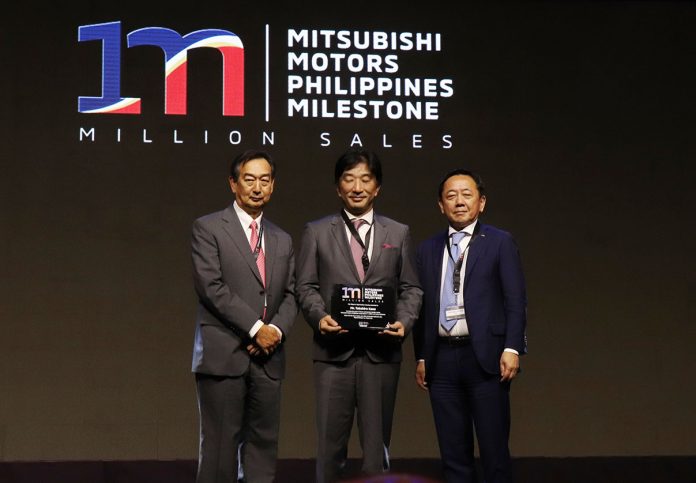 Ever since we can remember, Mitsubishi vehicles have roaming around the roads of the Philippines. And no wonder;  Mitsubishi has been in operation since 1963, for a total of 56 years running. So, when Mitsubishi hosted a grand celebration for its 1 Million units(!) sale, StreettalkPh wasn’t that surprised. In fact, we were elated!

So, in spirit of this milestone, let’s look back at a short history of Mitsubishi here in the Philippines, and see how hard they worked.

Starting out in 1963 as Chrysler Philippines Corporation, it handled the sales and distribution of Mitsubishi vehicles under the DODGE brand, aside from cars and trucks from the Chrysler and Plymouth marquee. One of the more iconic cars that came out during the early ’70s was the SATURN-engined Dodge Colt. In Two door coupe, 4 door, sedan and wagon, this baby was considered fast during its heyday, thanks to the 1.4 and 1.6 litre variants.

This period also introduced their version of the AUV – The Cimarron-a COE designed people and cargo carrier, which was a success among business owners. Mitsubishi showed its penchant for naming their engines after planets or heavenly bodies. Aside from the famed Saturn engine (discontinued after 1976) the Cimarron had the 1.6 litre NEPTUNE engine.  The versatile ASTRON (in 1.4, 1.6, 1.8 and 2.0 litre sizes) saw service in the now-bigger Galant, Lancer and Celeste models. The first front wheel drive, the first Mirage, also saw spectacular sales after introduction.

In 1987, a reorganization of Mitsubishi was made and was renamed Philippine Automotive Manufacturing Corporation (PAMCOR)  It took over distribution functions distribution of all Mitsubishi and Fuso (Truck) products.

The 1980’s saw the emergence of the most iconic sedan, the Mitsubishi Lancer “Box type”.  Now with sharp angle and boxy design profile, It was a radical departure from the curvy 70s model, and became the most coveted model ever. The style ran from 1980 to 1986, with an extended run in 1987 that gave the Lancer GT, a variant of the GT Lancer Rally car. The box design extended also to the the last RWD Galant Sigma in ’87 and the first FWD Galant. 1987 also introduced the Mitsubishi Pajero 4wd SUV and the L300 vans. And things were never the same again.

The 1990s saw the Lancer as a smaller and rounder model. The Galant GTI and MPI variants were more popular than ever. The now coveted engine – the 4G63 DOHC was the standard now. This period also introduced the EVO (Evolution) Lancer rally cars. They even offered a limited run of the Eclipse sports car.

The production of the Lancer continued until 2017, however the Galant was discontinued after the 1998 SHARK model. The profile of buyers changed, from cars to SUVs and vans; everybody was buying the Mitsubishi Pajero and the unsinkable L300 vans in droves. Sadly, the Lancer was discontinued in 2017.

The new models that captivated the mitsu fans now are the Mitsubishi Montero, the new Mirage and L200 Strada pickups, not to mention the L300 vans and FB, which has a new lease in life.

In a recent big event that celebrated the 1,000,000th vehicle sales,  which was attended by clients, dealers, enthusiasts and media personalities, all were treated to a short but insightful history of Mistubishi in the Philippines.

“Mitsubishi Motors Philippines has been selling top quality vehicles to the Filipino people for more than five decades,” MMPC president and CEO Mutsuhiro Oshikiri, stated. “This unprecedented record withstood the test of time which brought us to where we are today.”

After more than 5 decades, Mitsubishi is still churning out innovative cars and trucks. Congratulations to MMP! Here’s to the next million units!