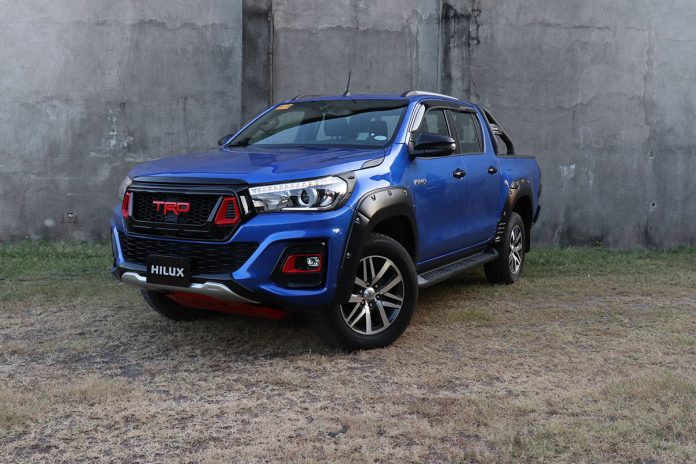 Among the locally available pickups, the Toyota Hilux ranks among the highest in the most desirable segment. Since its introduction in 1968, it has grown from a commercial delivery cab to an iconic truck, a lifestyle on its own. Its versatility and indestructibility is legendary. Even terrorists groups in the Middle East reportedly prefer Hiluxes in their campaign of terror; citing the seemingly unstoppable powertrain and suspension, even in the harshest terrain – this while carrying either big machine guns or missile launchers.

The 2019 Toyota Hilux Conquest is not that different from its roots. It’s still is the reliable and solid small truck, but is now more known as a lifestyle vehicle – the SUV counterpart. The Hilux also features luxury options that are also available in Toyota’s luxury sedans. Going off road in style has never been this popular.

The design conceals its off-road capabilities and Heavy-duty stature. Off the boat, it’s sporty, with a bevy of shiny hues and wheel combinations. Even the lowly delivery model looks aggressive. But, good news for enthusiasts: You can upgrade the already striking appearance to a more sporty and wild one. Presenting the TRD kit.

This particular Blue G Conquest unit has been making the rounds among the media groups since mid-2018, albeit in bare Conquest form. By the time StreettalkPh took temporary possession, it has been upgraded with a set of TRD accessories. Depending on your taste, the mild mannered Hilux now looks like a hungry wolf looking for more action.

This package reportedly will cost you around 180k. That’s beside the Php 1.782m for the basic G variant. The only letdown is the Fortuner rims and wheels; Its not even the meaty All Terrain tires. However, you could get the lower E Variant and procure the TRD package.

However, Torque rating differ with each transmission:

The 2.8 litre may be smaller than the competitor’s 3.0 litre powerplant, but believe me, this Toyota has more than enough power at tap. The Eco and Power buttons are there for a reason; one of them is for relaxed driving, the other one unleashes the herd.

The interior is plush and elegant, similar to the Fortuner. One thing that surprised us was the Heads Up Display (HUD) at the lower left side of the windshield. You can read your vehicle’s speed without looking down at the gauges. This is very practical especially during high-speed runs, or navigating rough trails that need your full attention.

The only downside here is the price. The Hilux G AT 4×4 Conquest will cost you 1.7m, more expensive than its closest competitor. But that doesn’t deter Toyota fans a bit. They know they’re getting their moneys worth.

There are other Hilux Diesel models to choose from:

The Hilux bring over 50 years of development and reliability that made it some sort of legend in the automotive world. You can rest assure that every centavo will be worth it, not to mention the good resale value if and when you decide to sell. Just don’t sell to terrorists.

For more information, visit toyota.com.ph/ or your nearest TOYOTA dealer.