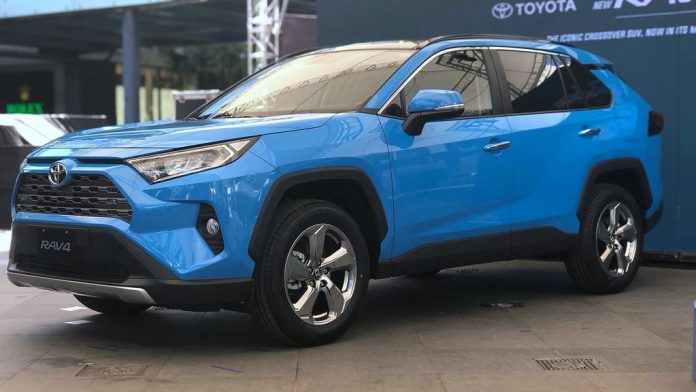 Toyota Motor Philippines (TMP) once again blazes the crossover SUV segment as they launch the All-New RAV4. Now on its fifth generation, the all-new 2019 RAV4 relies heavily on its upgraded premium design, with better performance and capability made by the Toyota New Global Architecture (TNGA) – a platform that applies Toyota’s principles and technologies to improve its vehicles’ Agility, Stability, and Visibility.

“The all-new RAV4 is a car that embodies Toyota’s values – from its sporty design, powerful performance, and outstanding safety features. Built with the Toyota New Global Architecture, we can expect this SUV to deliver only the best driving experience,” said TMP president Satoru Suzuki during the official launch of the RAV4.

Now, with a lower center of gravity, coupled with high0rigidity body structure, it also features a lower belt line,repositioned side mirrors and lower instrument panel resulting in smooth horizontal accents along the door panels.

The new RAV4 is now equipped with a newly developed front and rear suspension for a supple ride with responsive handling and a new powerful 2.5L (A25A-FKS) Dynamic Force Engine with Dual VVT-I with VVT-iE (Variable valve timing intelligent system by Electric motor) aiming for more performance and more fuel efficiency. Gone are the days of the previous model’s top heavy handling and less than desirable fuel economy. (Still, it was a very powerful and torquey 2.5-litre engine.)

The new RAV4 now highlights passenger-friendly features and technology such as 7-inch multi-information display that can be alternately switched between analog and digital display modes, wireless charger, 8-way power adjustable driver’s seat with memory and lumbar support, and inside rear view mirror.

Safety is also a priority of Toyota, as shown in its features such as seven (7) airbags, 8-eye front & rear sensor, back-up camera, anti-lock brake system with emergency brake signal, and Vehicle Stability Control (VSC) , aside from seatbelts and ISOFIX seats.

For more information, go to your nearest Toyota dealer