Ever since SUZUKI PHILIPPINES introduced the Suzuki Vitara to the Philippine market 20 odd years ago, it has set itself as a rugged and reliable mini SUV. What started as a small SUV has grown into a reliable commuter. Braving floods as well as rough roads, it has become an icon on its own. Sharing the same toughness as its cousin, the Suzuki Samurai, it became a favorite of the 4wd groups. Bulletproof mechanicals and light overall weight became a combination to be reckoned with.

So when Suzuki introduced the new Vitara in 2017, enthusiasts were startled, and some were aghast, that their beloved 4wd rig has become a sporty crossover – sans the 4wd system. To add salt to the wound, it now has a front wheel drive system.

Fortunately, and to their relief, the new Vitara has grown into a bigger and more handsome crossover, a refined gentleman so to speak. European styling, comfortable interior and a thrifty 1.6 petrol engine are now the norm.

The Vitara is wider and lower than its famous predecessor. The overall profile is now at par with its European counterparts, thanks to the stylists from Hungary. Imposing chrome grille merges with the LED-projector headlights, creating one swooping look. The Bumper has a middle large valance panel that gives it an all-business fascia. The rear lights are large enough to be noticed from afar, which is good when visibility is at a minimum. A combination of swooping lines and angular accent points gives the Vitara an SUV look while maintaining an automobile profile. 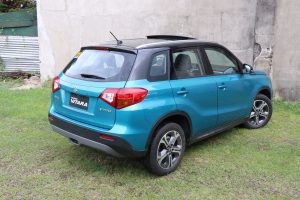 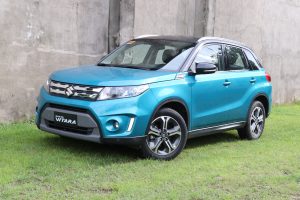 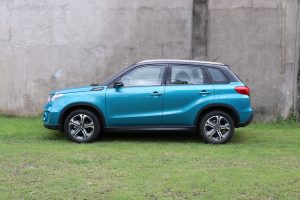 The roof has a pair of simulated racks, and for the GLX variant, a large panoramic sunroof is standard. The Vitara now comes in several Two-tone paint schemes that differentiate it from the pack.

The Vitara has a practical layout with all controls within easy reach. Making it easy are the steering wheel controls for blue tooth, entertainment system, cruise control and driving modes, and at the rear of the wheel are the paddle shifters. The Entertainment screen is a tad big, but is very visible from the back seat. The top of the dash is accented by a faux carbon fiber look. The rest is black textured plastic panels. The seats are nicely designed with red stitching, and can seat 5 adults rather comfortably. Baggage compartment is also remarkable in size, and it can fit 2 golf bags nicely. 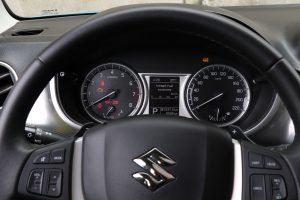 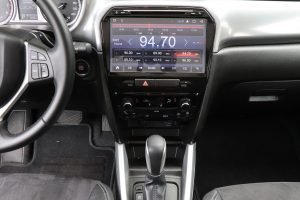 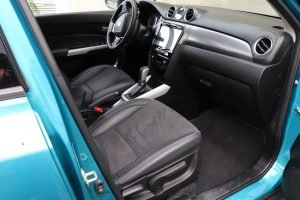 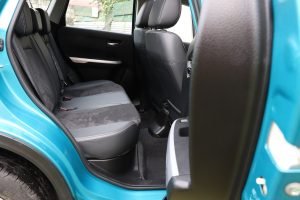 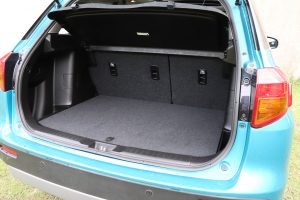 The only available engine for the new Vitara, is the 1.6 Petrol engine mated to a 6-speed automatic transmission. The engine produces 115hp at 6000rpm, which is just enough for the combined weight of the vehicle

17in rims with 215/55 tire combo gives a softer ride while maintaining a grippier hold on the tarmac. 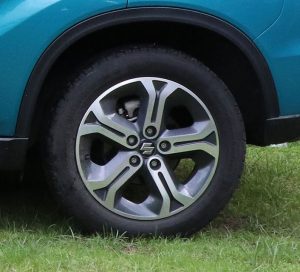 StreettalkPh tested the Vitara back in 2017 when it was introduced. Going to La Union, Pangasinan and back to Manila gave a good initial impression. With the engine barely breaked-in, the estimated fuel consumption was around 15km/L, with short bursts to 145kph.

When we tested the same unit a few weeks ago, the consumption improved to 16-17km/l at 90kph, with city driving consumption estimated at 8km/L (in that horrible EDSA traffic). Engine response improved dramatically, with acceleration now quicker than before.

Priced at Php1,098,000 for the GLX, it is worth every peso. The Vitara can give sedans and other crossovers a run for their money.