Yes, the Honda RS Turbo was launched last 2017, and yes, this particular car is over a year old. With over 17,444 kilometers when I took temporary possession, it already had battle scars, so to speak; a little bit weathered but just the way I like it. It’ll give me a more realistic review, with no break-in period; it is ready to release its true potential.

With brand new demo-units, we have to “baby” it a little. With the engine on mandatory break-in period, the true power cannot be unleashed. Engine clearances are still a tad tight, so basically, it’s usually slower and consumes more fuel. But that’s ok. Reviews are concentrated anyway on the new look and options that are usually introduced with new models. Later reviews are more focused on performance and ride quality.

The mileage on this particular unit is lower than a privately owned one, but since this is manufacturer owned, it had its share of merciless drivers, each with different driving styles. So its safe to say that this Civic RS Turbo is now in its true self.

The review a year after

As soon as I started the engine, I’ve noticed that it’s more responsive. The revs are quicker now. The leather seats are now more comfortable (thanks to previous drivers posterior weight) and the steering wheel a little bit weathered. I immediately put it thru the infamous Manila gridlock to feel the ride and more importantly, to gauge the consumption. Of course, the Turbo is useless in traffic, and the somewhat small 1.5-liter engine enough makes power in acceleration. Not sluggish, just a tad slow. Fuel consumption was not very conclusive because of heavy traffic, but it averaged 7-9km/L, which is acceptable considering the gruelling stop-and-go travel.2 hours of traffic is punsihing for the car, but the Civic took it in stride.

The Highway is where the RS is most at home. The 1.5 litre Turbo power comes in at 2500rpms and it propels the behemoth to an easy 100kph, with short burst to 140kph in seconds. Cruising speed is about 105kph with fuel consumption at 16k/L. 20k/L is possible at 80kph, but who would want that speed along NLEX? With nary a whimper, the engine immediately reached 3800rpms, only the light growl of the dual exhaust was heard.

Even with bigger 17in rims, the suspension is on the soft side. You hardly notice the bumps on the road. No body roll is evident and handling is very good. The only disadvantage here is the lower body height especially with the front air dam, which needs more attention in turning and parking. Steering is very responsive. It takes a little getting used to after driving a regular compact. 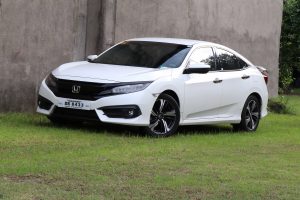 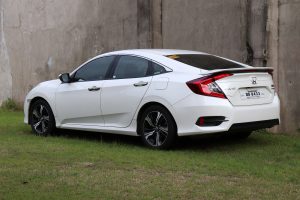 The Civic RS Turbo is a very aggressive looking car. The styling is more akin to a “Fastback” styling, with the C-pillars smoothly flowing into the boot opening.Although it looks like it has a rear hatch, that honor goes to the iconic Civic Type R. The front fascia boasts a Projector lamp/DRL combination, blacked out grille and an actual front spoiler is all business. Wider rocker panels mimic side skirts and at the rear, a functional spoiler is mounted conspicuously, like a warning for other cars not to mess with it. Of course, the dual exhaust pipes don’t hurt. 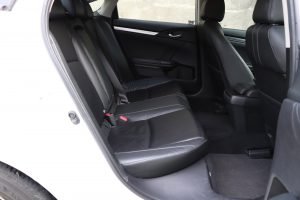 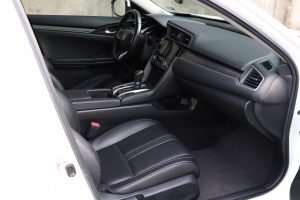 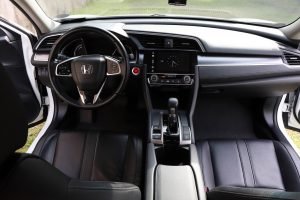 The interior is all business. The high console box host a variety of storage spaces, and with a slight pull of the cover, reveals a semi-secret compartment that may hide valuables, with a removable cup holder as cover. All controls are within reach. All pertinent controls are located conveniently on the steering wheel. The audio system, an all-digital “Driver Information Interface” incorporating a 7-inch LCD screen positioned directly behind the steering wheel and in the driver’s line of sight.

It is, however, is a little difficult to master, it seems it has a mind of its own, but the younger guys swear by it. The sound quality is superb, bass is crisp with no hint of vibration. The seats are countered for comfort, and the rear seats can accommodate three persons, with a wider legroom for taller people. The power option on the drivers seat is very welcome, you can custom fit your body and driving style with the flick of a button. The front seats are now more absorbing, as compared to the firmness of a brand new unit.

The boot (or baggage compartment to you mortals) is suprisingly spacious. It can fit a couple of golf bags with space to spare for groceries. For longer items, the rear seat folds down 60:40, with release levers both in the compartment and next to the headrests.

The overall package of the Civic RS Turbo is very appealing to both sides of the age spectrum. The younger generation can appreciate the styling, and the older generation (read Me) like the understated elegance and comfort aspect.

Just like the famed Civic SiR and the Civic Type R, the Civic RS Turbo will soon be a cult icon. Promise.