Home Cars The New Nissan Terra: The late knight is just in time.

Nissan Philippines Incorporated recently launched their new SUV, aptly called the TERRA. Sharing the platform with the popular Navara pickup, it also has the capabilities and suspension comfort the mighty pickup is renowned for. Among all pickups in the market, the Navara is rated as one of the most comfortable riding utility vehicle there is, and with the Terra possessing the same characteristics, it will boast the same comfort. The Terra is available in both 2wd and 4wd form.

Launched late May in an extravagant and festive regional launch, The Terra was introduced with much fanfare. Representatives from all over the Asia Pacific region converged in Clark Field as the Philippines is the first country outside of China where the Terra is introduced. The weeklong festivities also included the sales and marketing people as well as dealers and sub-dealers nationwide.

But why is Nissan joining the SUV fray so late in the game? The Montero and Fortuner have enjoyed their decade- long lead in terms of sales, followed closely by the Isuzu MuX , Ford Everest and even the Korean brands. Analysts say that one of the reasons is the increasing sales figure of SUVs in the Philippine market. Buyers are shifting their preferences from cars to bigger units such as crossovers, MPVs and SUVs as evidenced by the official sales report of their respective manufacturers. 7-seater vehicles are the norm now, and the Terra is no exception. Turbo diesel-powered, a seating capacity of 7 (plus cargo space to boot) plus the famed Nissan Climate control, it pinned down the perfect combination.

Inside, the interior setup is handsome enough, Leather seats for the 4WD variant and fabric for the base model, with the dash modest enough to read easily. No fancy buttons and gadgets except the touch screen sound system. The 4WD knob is on the lower part of the dash, as opposed to the console-mounted knobs of the competition.

One great feature here is the pair of switches to automatically fold the 2nd row seat; a convenient option for family oriented activities. Easy ingress to the 3rd row seats or extended cargo space.

Powering it is the same 2.5-liter YD25 diesel engine used in the Nissan Navara with an output of 190 hp and 450 Nm of torque. Mated to a 7-speed automatic transmission, you’re assured of good gear ratios; 1st gear for acceleration/climbing and 7th gear for highway cruising/overdrive. Of course, it’s equipped with the renowned NISSAN INTELLIGENT MOBILITY™. To those who are unfamiliar with this feature, it boasts of the following:

Aesthetically, the fascia strongly resembles the Navara, but there is more to this design. Hidden behind the grille is the front camera for the 360º view option as a part of the Nissan Intelligent Mobility. The side cameras are built underneath the side mirrors, and with a smart camera at the topmost area of the rear window. This also serves as the rear view mirror feed when the rear is is obstructed with people or cargo. No headlight glares too.

The only thing we’ve noticed are the rear DRUM brakes, as opposed to the competition, which are equipped with rear disc brakes. While there are advantages and disadvantages for the drum brakes, it just raises the question of the pricing of the TERRA, which is actually at par with the other brands. But mechanically speaking, drum brakes are simple and cheap to service.

So, what makes the TERRA different? Well, we were treated to an actual test drive during the launch, not only on the highway, but also on actual dirt and sand trail! I reckon that Nissan’s thinking is: if the Terra can pass the rough terrain with ease, so much so in urban traffic.

So how did it fare?

Suprisingly, the Terra performed flawlessly in the sand and water combination.
In street tires. With 4 passengers. With the AC on.
You can measure the reliability and 4wd prowess when novice drivers push through easily the trail in stock tires! As our instructor said, “The Terra inspires confidence as the 4wd and Differential lock perform easily, making the trail crossing easier.” 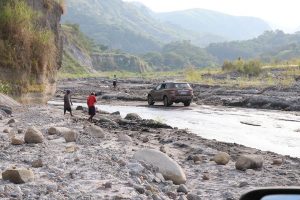 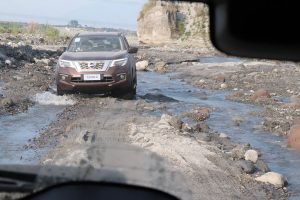 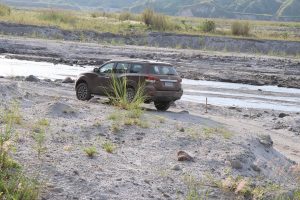 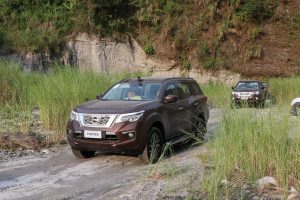 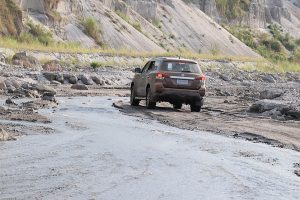 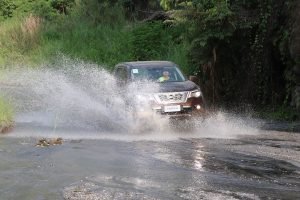 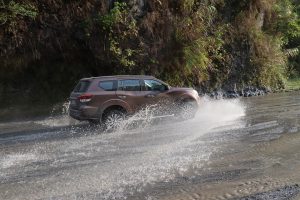 The sudden transition from watery sand to dry sand posed no problem traction wise. Slow but sure is the key, with no engine and transmission hesitation. We could have finished the trail in 4wd-High, but we opted to do it in 4wd-Low. Sure, proper driving application is vital, but the Terra does all the work. We are just in it for the ride. As expected, the ride was more comfortable; the suspension is more tolerant of rocky dips and potholes. No harsh suspension play here.

On our way back, via SCTEX, the 2.5-liter engine showed more oomph, easily reaching 120kph when overtaking. It could go faster but decided against it, mainly because of the infamous speed traps along the highway. It’s great knowing the powertrain can deliver. 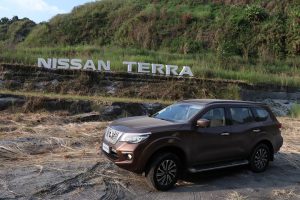 As for why the Nissan Terra is late in the game? Maybe it’s because the Nissan designers wanted to make the perfect combination, studying the different models of other manufacturers before releasing their version. Or maybe because they wanted to weed out, or at least minimize the disadvantages of the SUV design. Well Nissan did do their homework here. The Terra is packaged as a simple but effective SUV. You can dress up the Terra to the hilt and never look back. No frills, just an effective machine. Its introduction may be late, but the impact is spot on. Slow but sure indeed.